I was tempted to beg you to stay… let’s work it out! Was all I could think of, but something within stopped me from saying my thoughts out loud and I chose to go along with your plans…. Wisdom I say….

No one can walk your path or tell you how to walk it… We all have our maps/Gps to follow and we must align ourselves accordingly.

We all have lessons to learn and each path takes us to the very lessons your soul needs on this earth plane… If I had managed to persuade you to stay your soul would have grieved that I took away your lessons and would have never forgiven me for it… it would have  manifested in our physical world as conflicts happening between us, which both of us won’t be able to explain… a Karmic debt to pay by me because I took away your valued asset… Your dear, dear lesson that would have opened doors of opportunities to grow and discover a whole new you.

We are all walking our own paths… people you encounter only serve as an inspiration, a guide, an example which you have the choice to follow. Because we are all unique in our own ways, if it worked for them it might not work for you…. That’s why it’s a choice

If you need to stop or make a U-turn, even if, for whatever reason, and rightly or wrongly, I can see what’s at the end of the road. I cannot tell you what road to take, where to turn because if I do that, I am depriving you of the lesson

We are all walking our own paths

Ultimately, I walk my own path, and you walk yours.

However way and whichever way you choose to take your path all I can do is send you my well wishes and good thoughts, for your path to be lighted and for you to be illuminated every step of the way….

We are taught in life that the end all and be all is being in a relationship or marriage, that’s the meaning of life and once you find this special person he or she will complete you and make you whole… the butterflies, the twist in the stomach, the person who will forever make you happy who will wave a magic wand and your life will be awesome and complete.

But the sad thing is that once you find that special person, you suddenly realise that the gap, the hole can never filled by the person, instead the gap gets wider and the hole gets deeper… you begin to wonder whether you met your soul mate or you chose the wrong person, so you go out and search again crying and screaming in your heart who can complete me! Who can take the pain away! Who can make my life magical! You meet someone again still it’s no better and you begin to ponder whether you will ever feel whole, complete and loved!

The mistake we make is that we are not taught to have a loving relationship with ourselves we are told time and time again that it’s only a love outside of ourselves that will complete us and make us feel safe so we spend our whole life journey seeking for this special person that will love us, make us whole and fill the emptiness within…… not knowing we already the love we seek…. The love is inside us. It’s never been outside! If we take the time to nurture and treat ourselves like our own best friend and best lover, we will find with time the feeling of wholeness, completeness and love….

Anyone entering or in our life will just be a bonus… only we have the key to our love… its inside… Just learn to make it grow…. Slowly the beauty of this love will radiate and fill the emptiness within and make us complete.

the moment you allow the Ego to use its tentacles to latch on to eternal things for its very own identity that is the day you have giving yourself a life sentence, you have entered an invisible prison, a prison that has no boundaries, a prison you consciously not aware of only your soul feels the trap and it lies in anguish praying to get out…. the very nature of your soul is freedom! it screams and begs for freedom each time you attach yourself to material things….  when you lust for those things you have given it the key to your joy, your freedom, your happiness, your peace.

Your external world is so temporal its forever changing you can have everything you want and it’s gone with a twinkle of an eye, you can get bored with what you have, you can always want what you don’t have….. Dam! Not a place to find peace… enticing but a big Trap… an abyss that can never be filled, a vicious cycle I say…. When does it stop! On death? Life is never lived happily…. Forever wanting the next best thing, whatever it takes to fill this gaping hole… I wonder.

The only freedom is non-attachment to external things your truest freedom lies within your inner world that is where the soul is at peace nothing has any hold on it, nothing can hold it to ransom, just imagine not wanting or obsessing over your external world, you will open yourself to a better world… you truly embrace change, loses and seasons.

Earth is a school and lessons have to be learnt, it is a temporal place all the things are all subject to change… how can you give the key to your joy on things that can change, a big mistake, yes a big mistake! Once you learn how to tame the Ego, you find freedom,  life becomes more fun…. No matter what nothing or no one has the key to your freedom! unless you allow it

I listened or was I actually hearing because the words were like music to my ears… I tried to mentally summarise but was at a loss of what to picture in my mind … It was repeated to me time and time but I just could only hear but not listen… while she were talking my mind was definitely elsewhere, thinking of a million things to do, the party dress I will be wearing that evening, the new gym routines I will be performing and the lovely night I had with my new guy hmm I can still smell his perfume… oops must come back to the present… yeh what was she saying again…um, um, um even though I kept good eye contact and uttered the many words like ok, uh, uh, hmm you must be joking, my mind was never there, I could just make up a word or two but I wasn’t in the moment with the speaker… my mind was in some distant future or the past moment.

This bad habit has caused us a lot of pain, broken friendships/relationships/marriages, caused businesses millions, lost jobs because of some major errors, ill heath , less confident kids the list is endless. 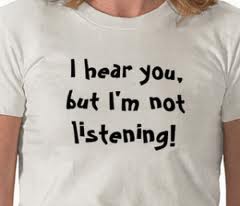 Our friendships always end up in a mess because we never took the time to watch out for the non-verbal messages, people sometimes don’t mean what they say or we selectively listen to what we want to hear, if we took the time to watch out for the tone of their voices, the way the person smiled, the expression around the eyes and mouth, sloping of the shoulders we would have definitely noted if the person was bored, irritated, genuine and a whole lot more.

So sad so many things we could have avoided if only, we were less preoccupied with our own thoughts or what to say next and take the time to actually listen to the person in front of us without being biased or judgemental you never know you can learn a thing or two…

Next time you have a conversation with someone listen to them with all your heart the rewards are astounding.